The Germans’ favorite Jews are Mr. and Mrs. Stumblestone and their children. They’re not fresh, they keep quiet, know their place in society and in history. They just lie on the ground and produce good feelings. And you can trample all over them. The best is: they’re dead! 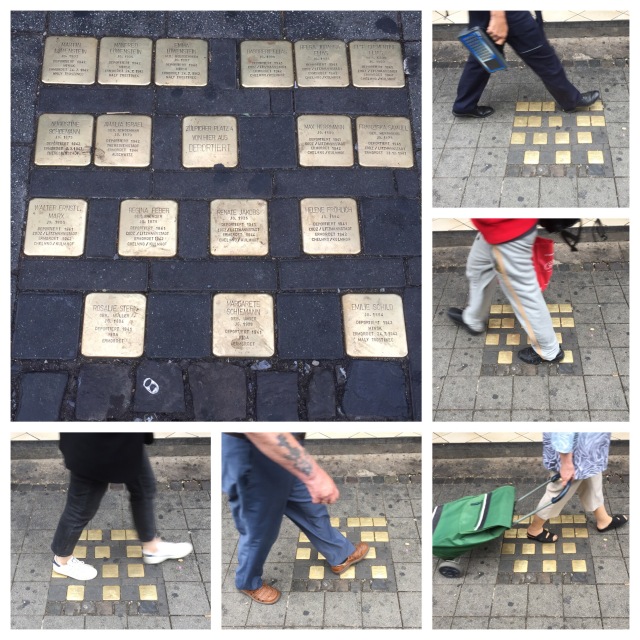 The Stumblestone ​project, began in 1992, is the brainchild of the artist Gunter Demnig. With small commemorative stones laid in walkways, recall the fate of people who were persecuted, murdered, deported, expelled, or driven to suicide during the period of National Socialism. Many Germans love those stumble stones. They’re proud of them.

During my school days, I sang with the school choir in front of the synagogue memorial in my Lower Saxony hometown of Haren (Ems), which was burned to the ground by the Nazis in 1938.

I went on a class trip to Dachau and Theresienstadt, talked to my grandparents about the time of National Socialism, and watched „Schindler’s List“ in history class. Today, I still deal with the past. Germans deal with their past, every year a bit more. Today is very distant from the past. In Germany, current problems are dealt with in the past!

In Germany, Judaism takes place almost exclusively in commemoration ceremonies. Jews are ghosts from an earlier era. In schools, Judaism appears much more frequently in history lessons than in philosophy, ethics, religious or social studies.

A lot of Germans never met a living Jew, but they know a lot of dead ones. In many German cities there are now more stumble stones embedded in the sidewalks in front of the last residencies of murdered Jews than there are Jews living in those same cities.

Germans nowadays encounter more dead Jews than living Jews. On the way to work, while shopping, at parties and at home, you’ll hear hear more about dead Jews. We don’t learn much about the great achievements of Jews, or about whom they loved and what made them rejoice, instead we find out when, where and how they were murdered. Anyone who reduces people to a status of victimhood may soon expect them to become actual victims. It’s a small step.

Of course, it’s important not to forget the incredible crimes committed against the Jews, but a person’s dignity can’t be restored by reducing him or her to the circumstances of their deaths. As long as there are more monuments in Germany commemorating murdered Jews than for their achievements, life will be difficult for living Jews in Germany.

Germany is proud of its past history, which would naturally wouldn’t exist if it didn’t happen as it did. A German street worth its salt has to have at least one stumble stone. There’s hardly a street without one. The trend is even moving towards a second set of stumble stones! With all the pride and attention towards the Jewish Stumblestone family, many Germans seem oblivious to the hatred towards living Jews, which is spreading today over German streets yet again.

On German streets, Jews are being harassed and synagogues are being attacked again. In Belgium and France, Jews have been even tortured and murdered in recent years, including children, because they were Jews. For more than 60 years, the small democratic country of Israel is surrounded by enemies who are waging a war. The radical Hamas aim for the annihilation of all Jews worldwide (final solution) while the so-called moderate Fatah would only like to eradicate the State of Israel (local solution). For decades, Israel has been defending itself against its very destruction. And all the German majority does is to criticize Israel during violent eruptions!

Of course, the conflict seems to escalate because Jews as soldiers have been able to fend off its destruction since 1948. Situations can escalate when Israel’s existence relies on active military defense. That’s why many Germans don’t like Israel. But they love the Stumblestone family. They had let themselves be so wonderfully murdered and if it weren’t for Auschwitz, there wouldn’t be the soundtrack of „Schindler’s list“. That would be a pity because the Germans love to listen to the sadness of the music.

Dead Jews are good Jews. Living Jews are just annoying. That’s why many Germans can, with one hand, throw a wreath to dead Jews and with other hand write a protest letter against Israel. From the Holocaust they’ve learned how to criticize Israel, because Germans know that the Jews in Israel must behave as they did in Germany, as the victims!

What would happen if the names of the perpetrators were engraved on the sidewalks in front of the homes of their descendants? One thing is certain; a lot of Germans would be tripping up and down the sidewalks. The offspring would surely protest. Because it’s not fair!

Many Germans love Jews only as victims. They’ll even shed a tear for them. For living Jews, however, they’ll use their last drop of ink to criticize Israel. That’s what friends are for, right?

Sometimes I wonder if it were possible to place stumble stones for the two children Arieh (5 years) and Gabriel (4 years), who together with their father Jonathan Sandler (30 years) were shot dead on March 19, 2012 in front of the Jewish school in Toulouse. One would think that as dead Jews they most certainly would gain the respect of many Germans. But, there’s a problem; those Jews weren’t murdered by a German, but by a “good” Muslim.

But who knows, maybe today’s murderers are only working on their future careers. After all, Germany has shown how lucrative an evil past can be. German mastery of the past is a true economic miracle and, in addition to cars and beer, is one of Germany’s most important exports. One wonders how employment would dramatically decrease if it weren’t for all the jobs in education, in the commemorative and documentation centers, and in the Holocaust research institutes and departments at the universities. Just a glance at tourist guides offered in Berlin hotels reveals which themes bring in the euros: „Third Reich Tour“ and „Hitler’s Berlin“.

If it weren’t for the Holocaust, the former Waffen-SS member Günter Grass would never have written „The Tin Drum“ and perhaps never received the Nobel Prize for Literature. Only Günter could manage such a career: In 55 years from the SS to a Nobel Prize! Logically, Volker Schlöndorff could never have filmed „The Tin Drum“ and therefore never received an Oscar. Practically all the Oscars awarded in the German-speaking world are the results of “confronting the past”: Volker Schlöndorff’s film, Caroline Link’s „Nowhere in Africa“ ​​and Christoph Waltz’s Oscar in his role as a Nazi. And none of these winners expressed thanks for the Holocaust at the Oscar award ceremony. Such lack of gratitude!

Perhaps there’ll be a similar development in the Arab-Muslim world as is presently happening in Christian Germany today. It’s certainly possible, because people are looking away again, aren’t taking threats seriously, trivializing and justifying. If it continues, an Arab-Muslim remake of the Stumblestone family will be in the making.