Ben Shapiro is an American lawyer and author. He made his first major public appearance at the age of twelve when he played the theme from the film „Schindler’s List“ at the Israel Bonds Banquet on his violin in 1996.

According to a study by the Anti-Defamation League, which counted anti-Jewish tweets between August 2015 and July 2016, Ben Shapiro was the most attacked journalist in the country, with over 7,400 hateful tweets against him. His offence: He’s Jewish!

Those who hate him claim that his Jewishness is not the problem. They say they hate him because he wrote for Breitbart News between 2012 and 2016. But old anti-Jewish images are used to defame him.

Today, on November 7, 2019, Ben Shapiro is scheduled to give a lecture at Stanford University in California. The current Stanford University motto “The wind of freedom blows” began with Stanford’s first president, David Starr Jordan, who wrote that he first encountered the phrase in the writings of Ulrich von Hutten (1488-1523), a German humanist. Stanford University has produced twenty-one Nobel Prize winners to date. The title of Ben Shapiro’s lecture is: „Facts don’t care about your feelings”.

A self-proclaimed anti-fascist group is now calling for Ben Shapiro’s lecture to be disrupted. Under the heading „Silent Rally“, a spray can with insecticide is shown with which Ben Shapiro is to be eliminated. 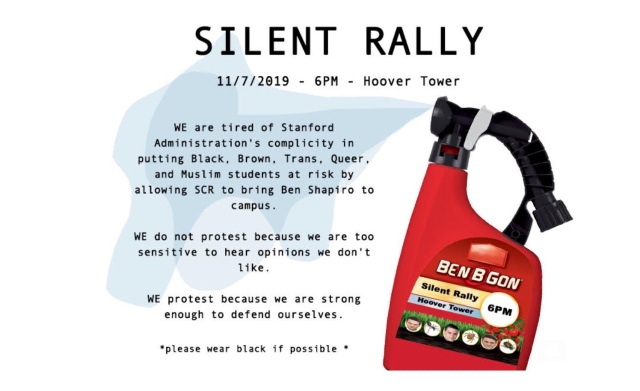 The designation of Jews as vermin and parasites has a long history. With such radical dehumanization and imagery National Socialists prepared the physical extermination of Jews. The Nazis simply excused themselves by saying that „exterminating vermin is not the same as murdering human beings“.

Heinrich Himmler, as SS Reichsführer, organized the extermination of Jews in Germany. He said: „To free oneself from lice is not a question of ideology, but a matter of cleanliness.“

In his autobiography „Mein Kampf“ Adolf Hitler wrote about „the Jew“. „He is and remains the typical parasite, a sponger who, like a harmful bacillus, spreads out more and more if only a favorable medium invites him to do so.“

In November 1941, Joseph Goebbels wrote about the Vilnius ghetto in occupied Poland: „The Jews are the lice of civilized humanity. They have to be exterminated somehow; otherwise they will continue to play their tormenting and troublesome role. They can only be dealt with using the necessary brutality.“

On February 28, 2010, the Deputy Minister of Religious Foundations of Hamas, Abdallah Jarbu, said that the „Jews want to present themselves to the world as if they have rights, but, in fact, they are foreign bacteria – a microbe unparalleled in the world. It’s not me who says this. The Koran itself says that they have no parallel: ‘You shall find the strongest men in enmity to the believers to be the Jews.’ May He annihilate this filthy people who have neither religion nor conscience. I condemn whoever believes in normalizing relations with them, whoever supports sitting down with them, and whoever believes that they are human beings. They are not human beings. They are not people. They have no religion, no conscience, and no moral values.“

In this unfortunate tradition, at a renowned university in California, a public appeal was made in 2019 which likened the Jewish author Ben Shapiro to a rodent.

Again, those who call people vermin act in the belief that they are doing something good to clean up the university.

Anyone who describes a person as dirt does not shy away from lies. In the Middle Ages, it was claimed that Jews poisoned wells, defiled sacred hosts, persecuted Christians and even brought the plague. For many people, it was clear that Jews would oppose the principle of charity. Martin Luther once wrote: „Such a desperate, thoroughly evil poisonous, and devilish lot are these Jews, who for these fourteen hundred years have been and still are our plague, our pestilence, and our misfortune.“

Even today there are people who are firmly convinced that Christianity is a religion of charity, while Jews are considered a vengeful people. To substantiate their conviction of the Jew’s vindictiveness, they often quote the Bible out of context, misinterpreting „an eye for an eye“; continually report negatively about the Jews, as often in the case of Israel, or simply make any assertions about Jews, fully aware of the fact that there are enough people who’ll believe anything if Jews are put in a bad light.

In the protest announcement against the „rodent“ Ben Shapiro, it says: „We are tired of Sanford Administration’s complicity in putting black, brown, transsexual, queer and Muslim students at risk” by allowing Ben Shapiro on campus.

In the old tradition of anti-Jewish tropes of well poisoning and sacrilege, Ben Shapiro is simply accused of hating people. But that’s just not true!

There is no reason for Jews to justify themselves when Jew-haters spread lies about them. I feel a physical discomfort reading all the lies spread against Ben Shapiro. As little as Jews were a danger for Christians back then, does Ben Shapiro today put Muslims, homosexuals or other people in danger. Ben Shapiro, as a human and a believing Jew, is convinced that all human beings were created equal and that they were gifted by their Creator with certain unalienable rights, including life, liberty and the pursuit of happiness.

Ben Shapiro supposedly poses a danger simply through his physical existence. That’s the essential message. The announcement even emphasizes that the university administration puts people in danger by letting Ben Shapiro on campus. That’s where the revolting image of the insecticide kicks in.

Jew hatred has always existed. But that hatred became life-threatening when the haters were strong enough to „defend“ themselves. The appeal ends with the words: „If possible, please wear black“.

The members of paramilitary militias of the Italian fascists were called Black Shirts. Their self-explanatory task was to rid the fine Italian people of evil filth. They were firmly convinced that they were doing the right thing.