On November 9, 2019, eighty-one years after the Reichspogromnacht (Pogrom Night), during which Jews were brutalized, synagogues burned, Toras desecrated and Jewish businesses destroyed, the thirtieth anniversary of the Fall of the Berlin Wall was celebrated in Germany in front of the Brandenburg Gate. Perfidiously, the German organizer took the opportunity to criticize the Jews.

During the show the following statement was addressed directly to the Jews: „Enough with the occupation“. The message was of course written in Hebrew.

This was backed up with: „Land without a wall“. Also, in Hebrew.

Of course, a depiction of which wall was meant, was shown.

On 9 November 2019, Germany had in effect called on Israel to give up the defence of its citizens.

The so-called occupation is not harassment, but a necessary protective measure. Israel wants to live in peace with its neighbours. Israel’s official statement is this:

„WE EXTEND our hand to all neighbouring states and their peoples in an offer of peace and good neighbourliness, and appeal to them to establish bonds of cooperation and mutual help with the sovereign Jewish people settled in its own land. The State of Israel is prepared to do its share in a common effort for the advancement of the entire Middle East.“

However, in some neighboring areas of Israel, hatred of Jews prevails. The founding charter of Hamas (August 18, 1988) states that all Jews should be exterminated worldwide (Article 7) and that there must be no peace with Israel (Article 13). That does not sound only like Nazis, that is Nazi. This photo was taken in April 2018 on the border between Gaza and Israel: a swastika flag framed by Palestinian flags. 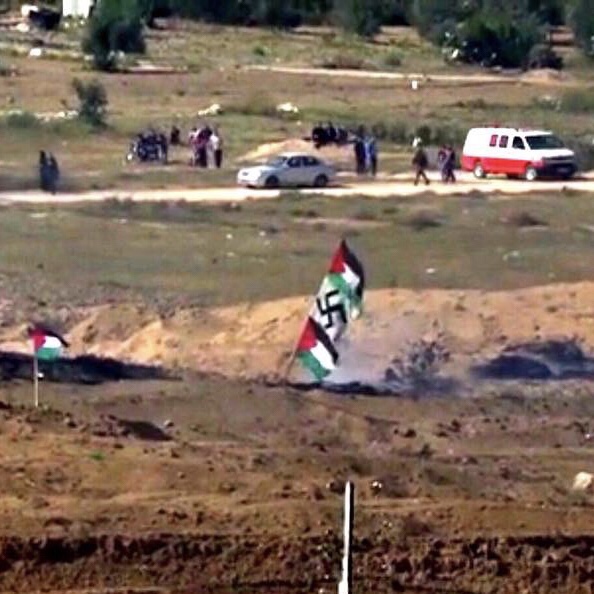 “(The Jews) want to present themselves to the world as if they have rights, but, in fact, they are foreign bacteria – a microbe unparalleled in the world. It’s not me who says this. The Koran itself says that they have no parallel: „You shall find the strongest men in enmity to the believers to be the Jews. May He annihilate this filthy people who have neither religion nor conscience. I condemn whoever believes in normalizing relations with them, whoever supports sitting down with them, and whoever believes that they are human beings. They are not human beings. They are not people. They have no religion, no conscience, and no moral values.”

„I support Germany in politics and Brazil in sports. I like the way Brazil plays soccer, but I like the Germans, because they hate the Jews and burned them. Hahahahaha!”

„Again and again God has punished the Jews. The last punishment was carried out by Hitler. In everything he did to them, – and the Jews exaggerate when describing these deeds – Hitler put the Jews in their rightful place. It was divine punishment for them!”

On October 9, 2015, the cleric Muhammed Salah „Abu Rajab“ delivered the following sermon in the Al-Abrar Mosque in Rafah:

„Our first phase shall be: Stab the Jews! They have no chance! The second phase should be: We will no longer expel the Jews! We will stab them all and slaughter them!“

On the 47th anniversary of Abbas‘ political party, Mufti Muhammad Hussein, whom Abbas personally appointed as the „spiritual leader of Palestinian autonomy“, spoke to a cheering crowd: „The hour of resurrection will not come until we have destroyed the Jews. If a Jew will hide behind stones and trees, the stones and trees will say ‘O Moslems, O Abdulla, there is a Jew behind me, come and kill him.’”

Children in the Palestinian territories are brought up to hate Jews. In schools and on children’s television it’s taught that Jews are not human beings and that it’s fun to kill them. Children learn songs celebrating the extermination of Jews. They memorize poems in which Jews are called the greatest plague in the world and should therefore be exterminated. Parents are proud of their children who kill Jews as suicide bombers.

This hatred is no less than the hatred of the Nazis. Nevertheless, in the sad month of November Germany tells Israel to end the „occupation“ and tear down the „wall“.

Germany is in effect demanding that Israel do nothing more than Jews did on November 9, 1938. Then, Jews couldn’t yet defend themselves effectively, because there was no Israel that would have protected them from extermination, with walls and military force if necessary.