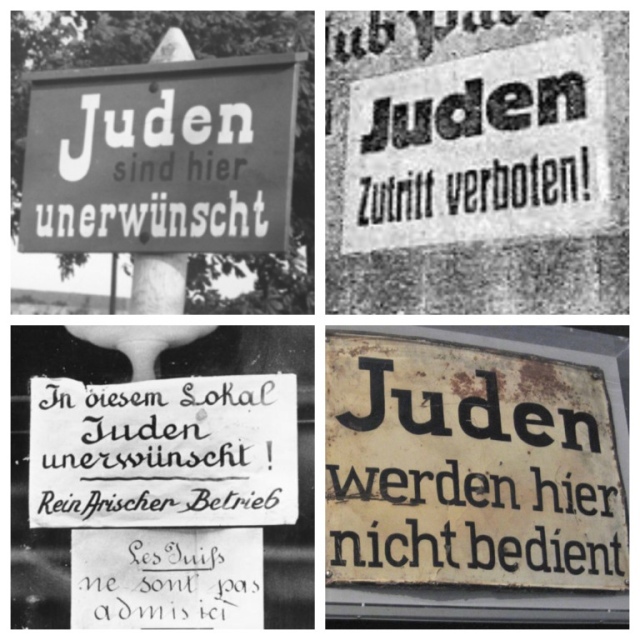 These signs were once posted in Germany. Imagine if Jews had ignored those signs and entered where they were prohibited. Which would you describe as highly provocative: the sign or the Jew?

The Reuters news agency decided to criticize Jews when they enter places where they are not allowed access rather than the discriminatory signs.

At the beginning of June 2019, a group of Jews entered the Temple Mount in Jerusalem. The Temple Mount is controlled by the so-called Pious Foundation of Islam (Waqf) which ensures today, that only on a few days a month, the rules apply to the Temple Mount as those the Nazis made for public parks in Germany in 1942: „No admittance for Jews!

Although the Temple Mount is the most sacred site for Jews, it is guarded by Muslims. That would be like Medina being guarded by Christians, Mecca by Jews and the Vatican by Muslims.

Access to the Temple Mount is possible via eleven gates on the north and west sides of the complex. However, only Muslims are allowed there. In case of doubt, Muslim visitors from other countries must prove that they are followers of Islam. Believers of other religions are only allowed to enter the site from Saturday to Thursday via the Moroccan Gate at the Wailing Wall. Entry is only possible after strict security checks outside prayer times. Jews are admitted, if at all, only in small groups and often under supervision.

The Dome of the Rock may only be accessed by Muslims! It is also forbidden to bring in books and religious objects or to hold prayers of any religion other than Islam. When Jews enter the Temple Mount, they are often threatened.

Christians can also face problems on the Temple Mount.

What would happen if Christians behaved like this? What if the Vatican denied Muslims access to the country on any Christian holiday? What if Jews were not allowed to visit the square in front of Cologne Cathedral on Sunday?

Under the administration of the Pious Foundation of Islam, the Temple Mount is today like a park bench or a public park under the jurisdiction of the National Socialists. The motto is: „Jews are not welcome!

But the news agency Reuters writes:

„The highly provocative visit took place during the last days of the holy month of Ramadan, when Muslims gather for prayer on the grounds of the Al-Aqsa Mosque, the third holiest place in Islam where non-Muslims have been forbidden to pray since 1187.“

For Reuters, Jews are a nuisance if they don’t stay away from places they’re told not to enter. Who knows, maybe the Jews who disobeyed the Nazis were just provocateurs looking for trouble.